The Brandon Police Service is seeking the public’s assistance in solving a;

On April 19th, 2022, shortly after 3:00am, suspects in a white Ford Escape forced entry to a business on the north hill.  Once inside, they threw a tow rope around an ATM located at the front of the business and attempted to drive off with it.  The attempt was unsuccessful but the business and ATM sustained damage.  Police have obtained surveillance footage of the suspects from another business and are attempting to identify him.  A still image of the suspects and vehicle is provided with this release.

The first suspect is described as a male with light skin, dark hair, glasses, with a small amount of facial hair on his chin.  He was last seen wearing a grey toque, black north face jacket/hoodie, grey sweat pants, navy running shoes with a white soles.

The second suspect was a male, wearing a navy hoodie with a large white design on the front, black jacket, blue jeans, and black runners with white soles. 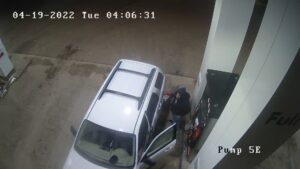 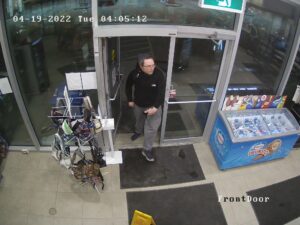 If you have information about this or any other crime you are asked to contact Brandon Crime Stoppers @ 204-727-TIPS (8477), www.brandoncrimestoppers.com or by texting BCSTIP+your message to CRIMES (274637).  Crime Stoppers does not subscribe to Call Display.  Your call is not recorded and your identity will remain anonymous.  Crime Stoppers will pay up to $2000.00 cash for information that leads to the solution of a crime.

Crime Of The Week By Date: