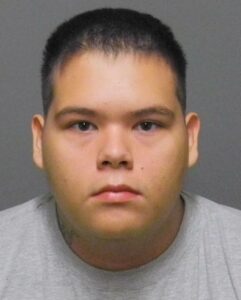 – Unauthorized Possession of a Firearm

– Handle Weapon in a Careless Manner

– Assault With a Weapon

On August 16, 2018, the Brandon Police Service received a report of a domestic incident which had occurred in the 400 block of Assiniboine ave. FRANCOUER and the victim became engaged in a verbal argument that escalated into an extremely violent situation. FRANCOUER punch the female victim in the jaw causing her to fall to the floor. As the victim tried to escape, FRANCOUER grabbed her by the hair and threw her onto a patio table and the concrete floor. As the victim got up, FRANCOUER proceeded to choke her, almost to unconsciousness. FRANCOUER continued to assault the victim after he and the victim got into a motor vehicle. FRANCOUER then cut the victim with a knife as she drove the vehicle to a different residence. At this residence, FRANCOUER picked up a handgun and threatened to kill her while he pointed the gun at her.